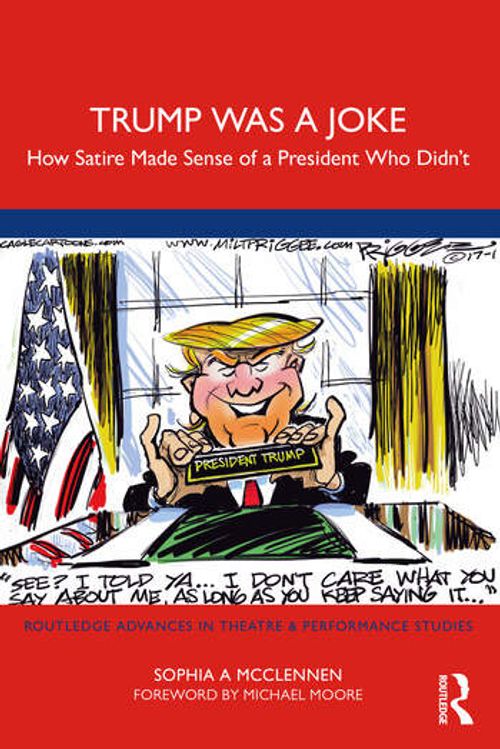 Written by a scholar of satire and politics, Trump Was a Joke explains why satire is an exceptional foil for absurd political times and why it did a particularly good job of making sense of Trump.

Covering a range of comedic interventions, it analyzes why political satire is surprisingly effective at keeping us sane when politics is making us crazy. Its goal is to highlight the unique power of political satire to encourage critical thinking, foster civic action, and further rational debate in moments of political hubris and hysteria. The book has been endorsed by Bassem Youssef, referred to as the Jon Stewart of Egypt, and Srdja Popovic, author of Blueprint for Revolution, who used satirical activism to bring down Serbian dictator Slobodan Milosevic.

With a foreword by award-winning filmmaker, satirist and activist Michael Moore, this study will be of interest to readers who follow politics and enjoy political comedy and will appeal to the communications, comedy studies, media studies, political science, rhetoric, cultural studies, and American studies markets.

“Sophia McClennen’s new book is a fantastically readable analysis of why ironic comedy has become so important in politics today. It confirms what I witnessed myself as a political comedian in Egypt during the Arab Spring: The crazier the politicians get; the more valuable political comedy becomes for the public. As I learned myself and as this book proves, when absurd politicians take power, it is hard to use reason against them, but it can be easy to use satire. McClennen convincingly shows how satirical comedy helps reason triumph over political repression. Even better, Trump Was a Joke reminds us that when you’re laughing, you can’t be afraid.”

— Bassem Youssef, the “Jon Stewart of Egypt” and author of Revolution for Dummies: Laughing Through the Arab Spring

“Trump Was a Joke offers the best, most-comprehensive guide yet to the power of political satire in shaping public opinion during turbulent political times. It is a must-read account of how political satire has come to play such a dominant role in contemporary politics, especially in the era of populist leaders and the global war on truth. It does an excellent job of explaining how being seriously funny can have serious impact on keeping us sane and it shows us how satire can work as a powerful political tactic.”

— Srdja Popovic, author of Blueprint for Revolution: How to Use Rice Pudding, Lego Men, and Other Nonviolent Techniques to Galvanize Communities, Overthrow Dictators, or Simply Change the World