The Sustainability Showcases make connections between faculty research, personal and professional interest and the United Nations Sustainable Development Goals while broadening the discourse surrounding sustainability. McClennen was invited to speak about her new book, Pranksters vs. Autocrats, and the implications it has for achieving the UN Development Goals.

McClennen featured as a keynote speaker for the North Carolina Latin American Film Festival. Check out the full schedule here.

Pranksters vs Autocrats: Why Dilemma Actions Advance Nonviolent Activism— a collaboration with Serbian activist Srdja Popovic –will be out in October and will be free as en e-book.  It is available for pre-order now.

McClennen interviewed on Islamophobia in the 2020 Election.

McClennen joins a panel to discuss the mainstreaming of Islamophobia in the 2020 elections for Scope hosted by Waqar Rizvi for @indusdotnews.

Read the rest at Indus News 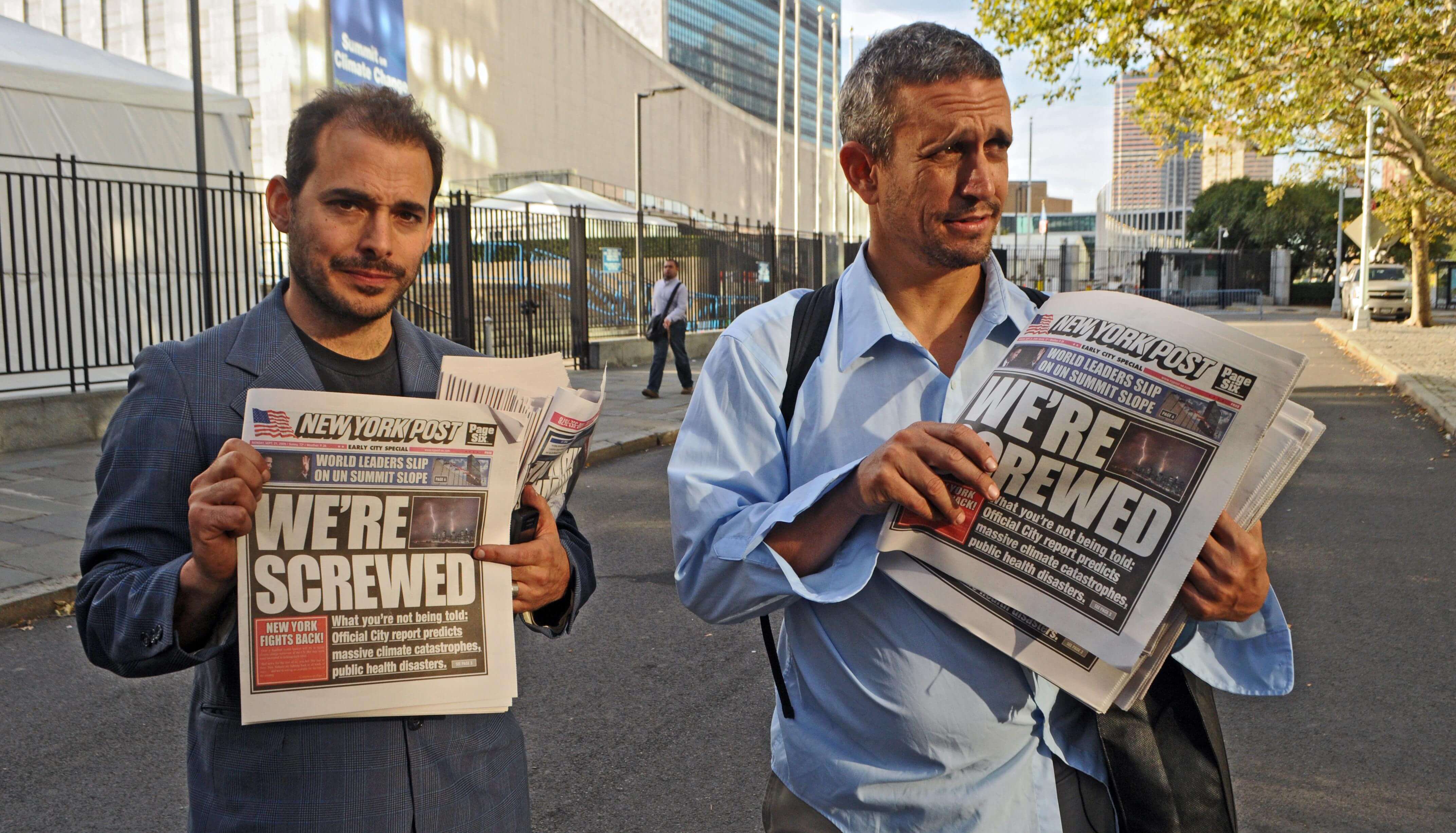 Sophia McClennen presents at the Center for Applied Nonviolent Actions and Strategies Summer Academy with @SrdjaPopovic @CANVASNVS on “Creative Activism, Dilemma Actions, And The Use Of Humour – Hilariously Groundbreaking Tactics.”

What good is comedy during a pandemic?

McClennen interviewed on political comedy in the age of the coronavirus for KPFA radio. Have a listen here.

McClennen joins a virtual panel discussion on “No Laughing Matter: Comedy, the Constitution, and Cancel Culture” for the Media Law Resource Center, May 21, 2020.

McClennen to lecture at Stanford 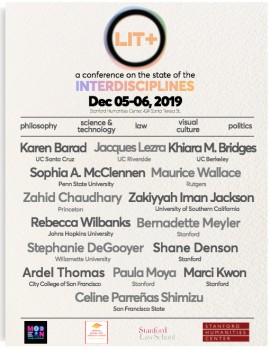 **McClennen will present work on her new book at Stanford’s “LIT+: A Conference on the State of the Interdisciplines,” on December 5 and 6, 2019. **

The presence of satire in elections is only going to rise. McClennen interviewed on the topic for a new piece in The Guardian by Tracey Lindeman.

McClennen interviewed by Halli Casser-Jayne for her podcast. They chatted about satire and politics in the Trump era and why laughing at abuses of power is good for the brain. Have a listen here.

McClennen interviewed on satire and the 2020 election 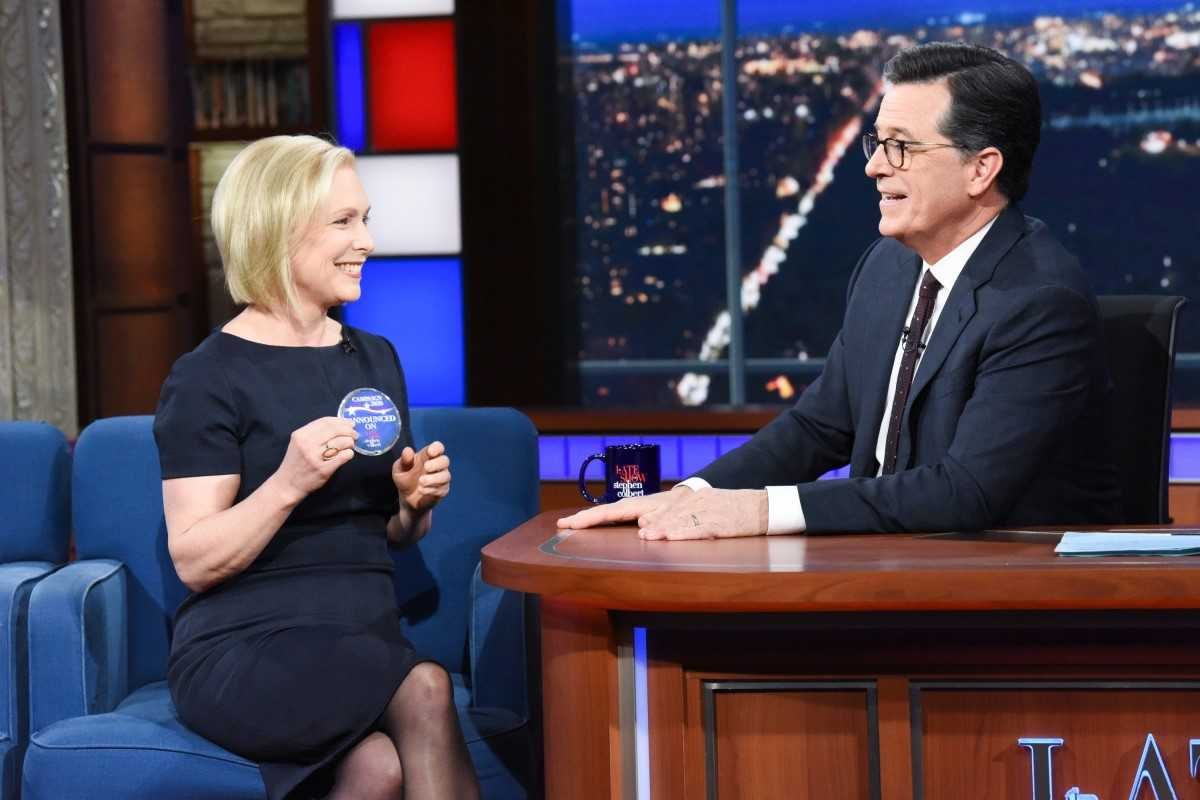 McClennen interviewed by Steve Loiaconi for ABC6News on the role that satire will play in the 2020 election.  Check out the article here.

McClennen interviewed on satire and politics

McClennen to lecture at Tulane 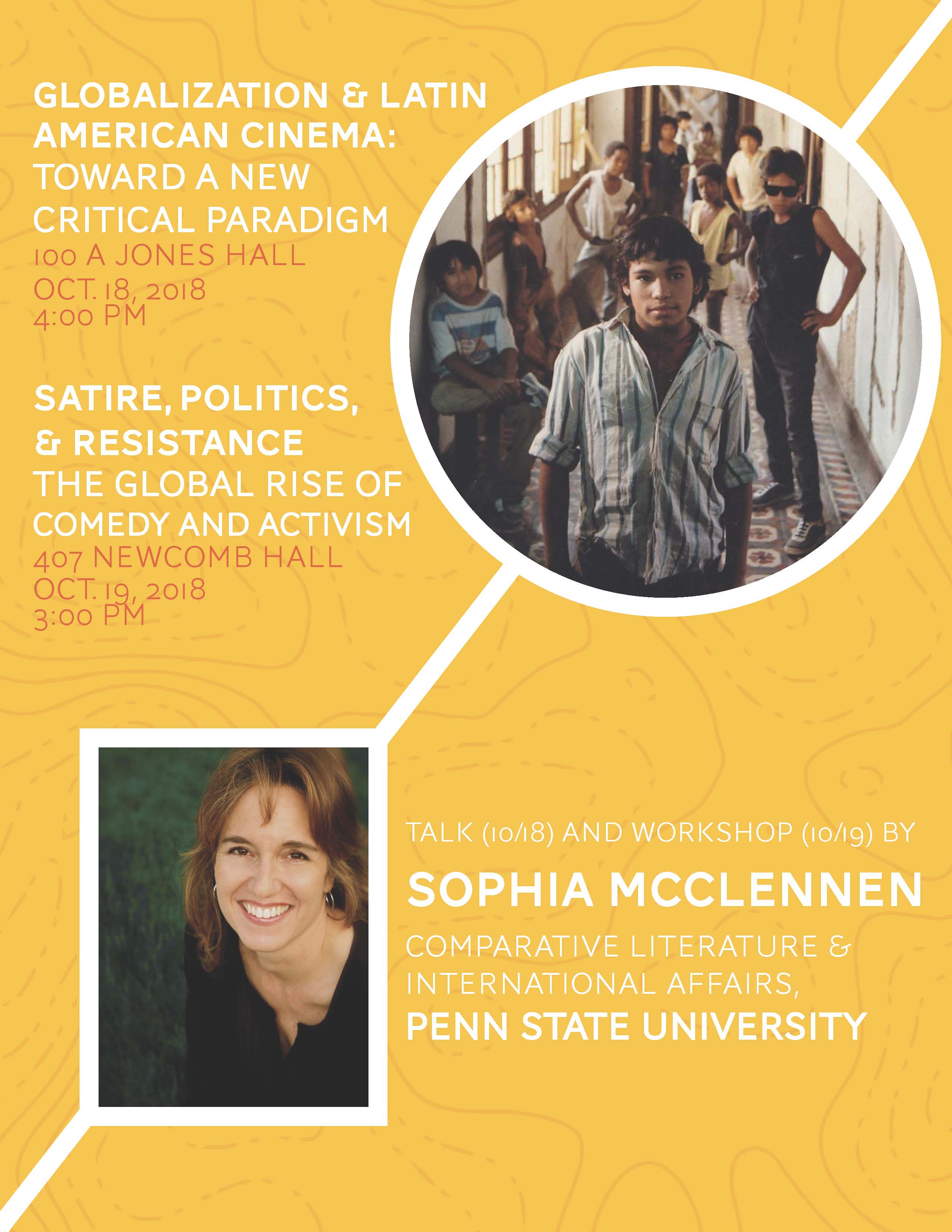 Sophia McClennen will be offering two lectures at Tulane University’s Stone Center. On October 18 she speaks on her new book on Latin American Cinema and Globalization. On October 19 she speaks on the global rise of political satire and its implications for democracy.

McClennen interviewed by Mideast Beast on Satire and Trump

Are our leaders evil, stupid…or both? Whatever the answer, the world of satire has its hands full like never before. The newest episode of the Mideast beast podcast series sees the Editor of The Mideast Beast in conversation with Professor Sophia A. McClennen, who’s literally written the book on satire. They discuss satire in the age of Trump, why you shouldn’t worry too much about stupid people, and how to handle satire in a region where you can get hung for a cartoon. Go straight to So

On this episode of StarTalk Radio, we uncover the truthiness and nothing but the truthiness. We feel the science at you. Neil deGrasse Tyson sits down with returning guest Stephen Colbert, host of The Late Show, to explore how he deconstructs the world around us using satire and science. In-studio, Neil is joined by comic co-host Adam Conover, host of Adam Ruins Everything, and Sophia McClennen, PhD. author of Colbert’s America: Satire and Democracy, to discuss Colbert’s influence on our society.  Check it out.

Mark Susnow interviewed me on politics, satire and the age of Trump for his Inspire Possibility show. Have a listen here.

McClennen to lecture on new book at LASA

McClennnen lectures on her new book “Globalization and Latin American Cinema” at the LASA convention in Barcelona on May 25, 2018.

CSPAN covers my talk at UMN

The YouTube link for the CSPAN coverage of my talk at UMN’s State of Our Satirical Union event is live.  Check it out.

A two-day symposium, April 20-21, 2018, at UMN’s Hubbard School of Journalism and Mass Communication.  The event is sponsored by University of Minnesota’s Silha Center for the Study of Media Ethics and Law, The Association of American Editorial Cartoonists, and the Minnesota Journalism Center.

McClennen was featured on John Grebe’s Sounds of Dissent show for WZBC Radio News in Boston on her recent piece in Salon about our hyper focus on Russiagate. Have a listen here.

The College Arts & Humanities Institute at Indiana University is delighted to host a discussion with Serbian activist Srdja Popovic and acclaimed scholar Sophia McClennen on the contemporary power and functions of political satire. Details here.

Interviewed by Rick Tocquigny for Life Lessons on satire, politics and the health of our democracy. Listen to the interview here.

McClennen to present at the Johns Hopkins Foreign Affairs Symposium

McClennen joins a line up including Samantha Power and Chelsea Manning at the Johns Hopkins Foreign Affairs Symposium for Spring 2018. More details here

McClennen at the McCourtney Institute for Democracy

McClennen to present on her new book project “Trump is  Joke: Why Satire Makes Sense When Politics Doesn’t” on February 20 at 3pm. More details here. 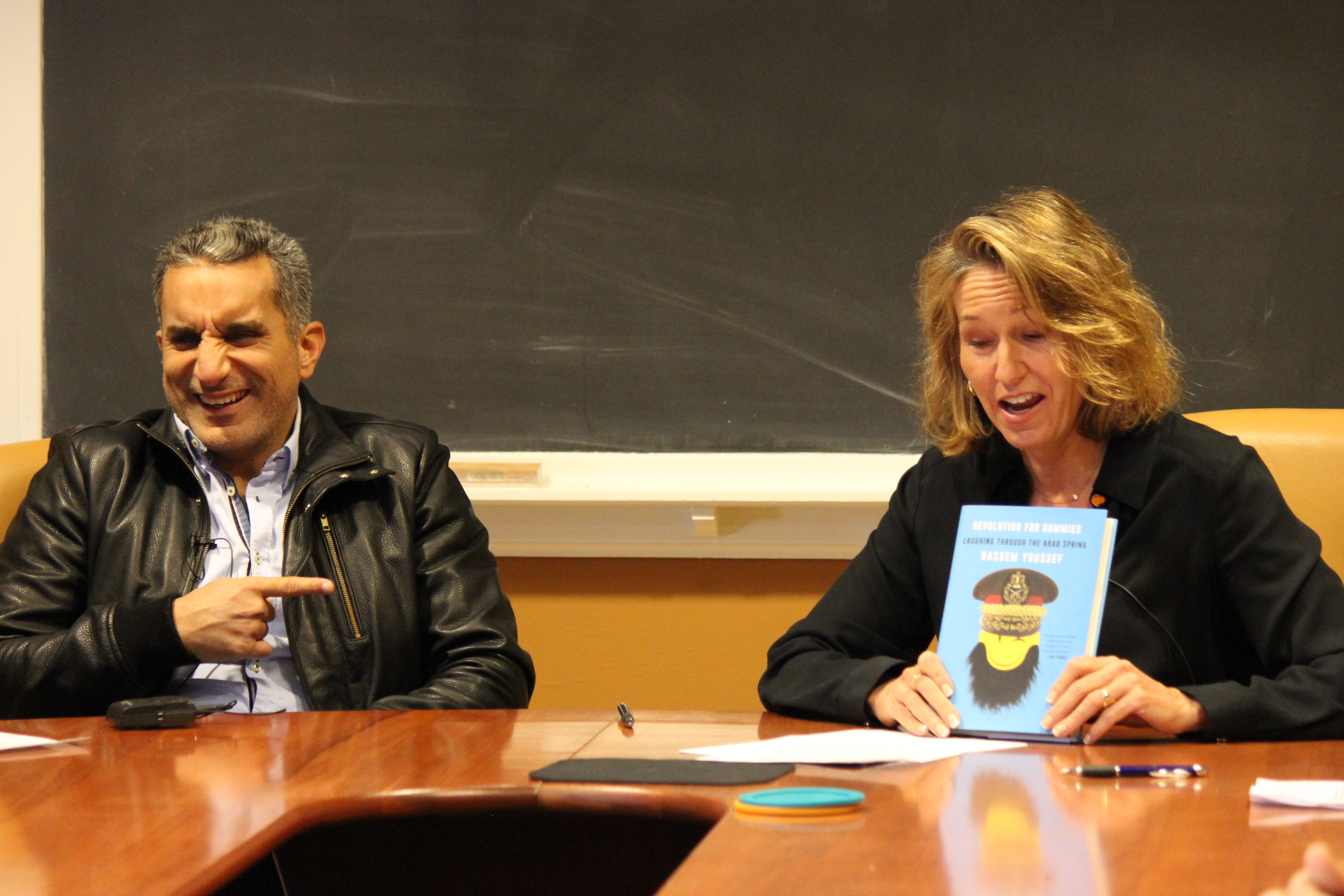 I was thrilled to have a chance to host an event at Penn State with Bassem Youssef and Sara Taksler, director of the documentary about Bassem–Tickling Giants.

I was thrilled to have a chance to appear on Neil deGrasse Tyson’s show Startalk along with comedian Adam Conover for an episode on Stephen Colbert. Check it out here. 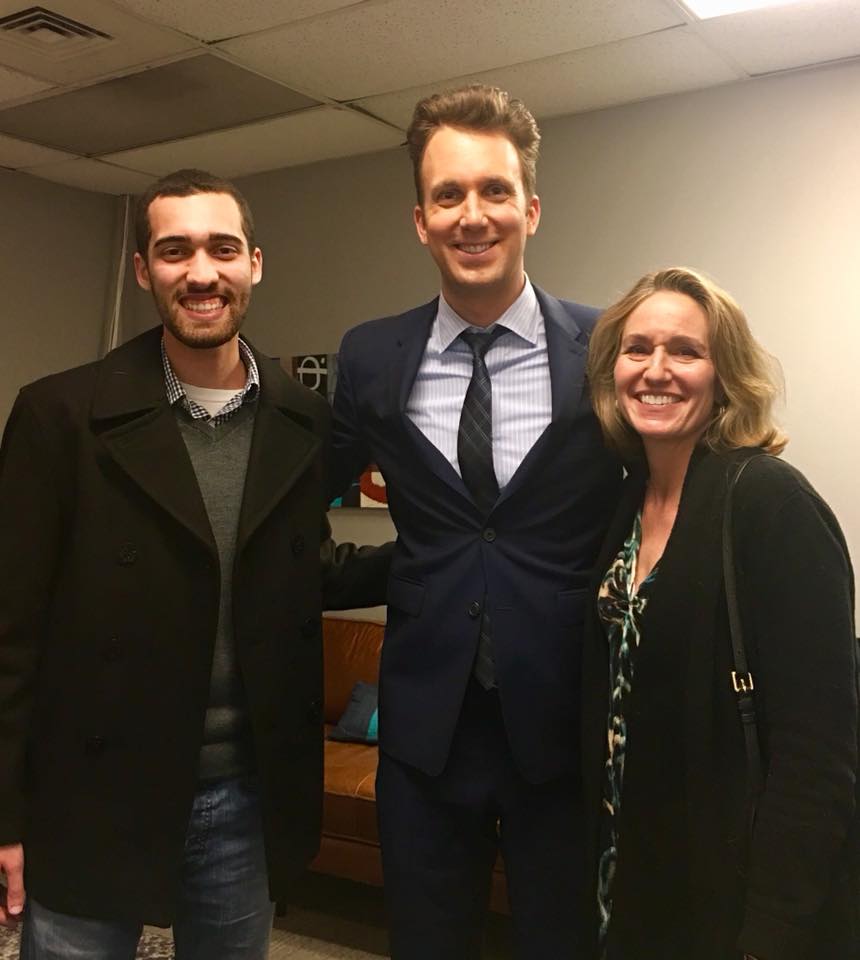 I was able to attend a taping of The Opposition on January 3–and got a chance to say hi to Jordan Klepper after the show.  Look for my interview with him later this month.

I was a guest on NPR affiliate KPFA-FM/San Francisco CA with Living Room to talk about free speech on college campuses. Listen to the interview here. 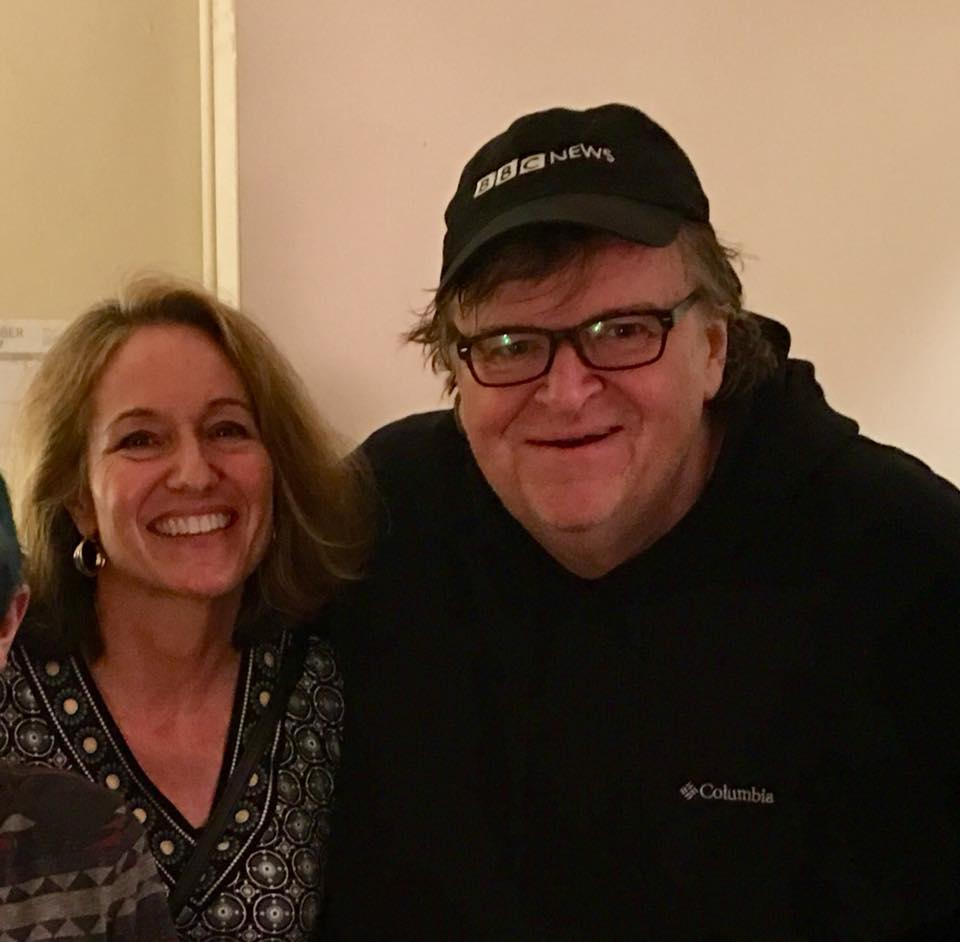 I went to see Michael Moore’s new Broadway show, “The Terms of My Surrender” and I got to say hi backstage after the show. Read the Salon piece I wrote after seeing the show here.

McClennen lectured on “Satire in the age of Trump” at a reporter workshop for Der Spiegel in Hamburg in May 2017.

McClennen an invited speaker for ICEE fest in Bucharest

McClennen was a featured content expert at ICEE fest in Bucharest, Romania in June 2017. Check out coverage of her talk here.

McClennen a featured speaker at ICEE fest in Bucharest

McClennen joined a group of media experts to present on content at ICEE fest in Romania in May 2017. Her talk focused on how satire is better than the news at covering Trump. Check out coverage of her talk here.

Read the interview in German here.

McClennen to Keynote in Sheffield.

I will be speaking on debts and rights at The Interdisciplinary Centre of the Social Sciences (ICoSS) in Sheffield on September 12.

I talked with John Grebe with WZBC Boston about the future of the DNC on July 23.

McClennen talks to Thom Hartmann about satire and Trump.

Thom Hartmann talked with guest Sophia McClennen on the many benefits and uses of satire–especially in the Trump era.

McClennen interviewed on SiriusXM’s morning talk program “Stand Up with Pete Dominick” on April 19. Have a listen.

McClennen featured on Watching the Hawks

Author, teacher, and lecturer Sophia McClennen entered the Hawk’s Nest on April 13, 2017 to help navigate the intersection of satire, news, and politics. Just how has the art of satire in the United States changed in the age of President Trump. Watch the clip here.

McClennen interview on satire in the Trump era for BBC Scotland.  Have a listen here

McClennen interviewed for XRAY FM on satire and Trump.  Have a listen.

McClennen to Keynote conference on The Politics of Dissent

McClennen to speak on satire, democracy, social media and millennials at a conference on The Politics of Dissent: Satire, Sarcasm, and Spite in Civil Society. Hosted by the Society for Values in Higher Education at Oberlin College, July 13.

McClennen at the Kennedy Center

The LaMarr Kopp faculty award recognizes, annually, a faculty member at The Pennsylvania State University for significant contributions to the advancement of the international mission of the University.

Interviewed on Univision’s acquisition of The Onion. Will it affect their satire? find out here.

The Washington Post picked up my piece on millennial protesters from the Conversation. Check it out here. 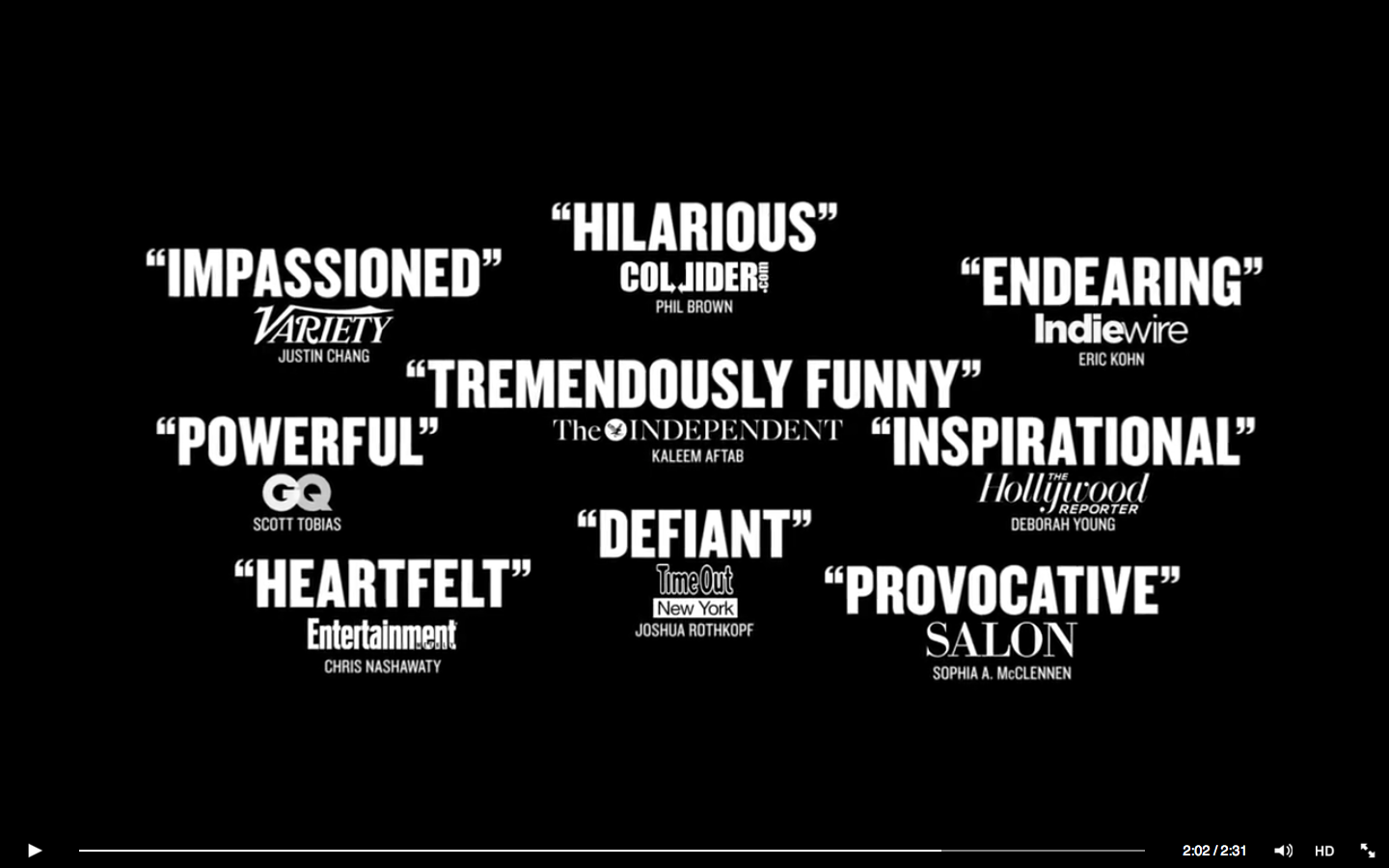 Prof. Mcclennen’s Essay on Alterlatino Identity Appears in the Journal of American Studies of Turkey

Is neoliberalism ruining our universities?

Truthout has published an excerpt from my co-authored book with Jeffrey Di Leo, Sophia McClennen, and Kenneth Saltman: Neoliberalism, Education, Terrorism: Contemporary Dialogues. Check out Twelve Theses on Education’s Future in the Age of Neoliberalism and Terrorism.

Ideas of the Decade

Routledge has designed the book cover for The Routledge Companion to Human Rights and Literature.

Does our nation need satire to survive?

Is Satire Saving our Nation?

My new book–co-written with Remy Maisel –will be out on October 30. Is satire saving our nation? Does our democracy depend on it? Or is satire destroying our faith in the political process? Pre-order to make sure you have a copy in time for the mid-term elections!

Check out the review of Neoliberalism, Terrrorism, Education in Academe.

Sophia McClennen and Remy Maisel have just received a book contract from Palgrave to write a new book: Is Satire Saving Our Nation? Mockery and American Politics. More details on its release soon.

McClennen delivers the 2013 Peace Perspectives Lecture at the University of Missouri as part of the Chancellor’s Distinguished Speaker Series.  Details on the event here.

Alexandra  Schultheis Moore and I have just received a contract to edit the Routledge Companion to Human Rights and Literature.  The volume will have approximately 50 essays and will be framed as a must-have volume for those interested in the field.  See other volumes in the series here.

Satire is shaping the next generation of American citizens

Is Colbert saving US democracy?

Listen to this interview with Eleanor Hall from ABC News (AU) on Colbert’s America and US democracy.

Leah Wescott of Cronk News interviewed me for the debut podcast for “Fridays are Satiredays“.

Alex Strachan for Canadian news on political comedy, the election, and young voters at Canada.com, The Edmonton Journal, and The Vancouver Sun.

Alexander Heffner writes* “Colbert’s America* is a book for citizens of every creed who believe we are all entrusted with piloting American democracy.”

Colbert’s America is a “smart book.”

Peter Bart from *Variety *on Colbert’s new book and mine.

Watch this interview with me for The Wall street Journal Live on the upcoming Stewart v. O’Reilly debate.

Q&A with Sophia A. McClennen on ‘Colbert’s America: Satire and Democracy’ with Kris Kitto for The Hill.

Satire has influence in politics

Media Post’s Fern Siegel writes: “Sounding like the president of Colbert Nation, McClennen makes a thoughtful, well-researched case for concluding his satire is ‘redefining the parameters of political dissent.’”

How to Get Stephen Colbert

​”Satire never tells you what to think.”

Quoted alongside Al Franken in John Rash’s “Laughing at, but not with, our politicians” for the Star Tribune.

Is Politico’s Patrick Gavin trying to get me on The Colbert Report? Check out his piece here.

I spoke with Angel Clark for Radio Freedom on July 30.   Listen to the interview here.

Am I a Colbert Coddler?

Looks like we annoyed Newsbusters enough to get a piece by its publisher and the founder of the Media Research Center.

Truthinessology: The Stephen Colbert effect becomes an obsession in academia

Colbert’s America is mentioned in this piece by Paul Farhi for the *Washington Post. *

Click here for McClennen’s interview on Viewpoints on Media Tracks.

Quote from Dorfman himself: “I purloin the phrase from Sophia McClennen, my most astute critic, thus far, who has written extensively about my work, most notably in a new book, Ariel Dorfman: An Aesthetics of Hope.” Art Bulletin, march 2009. Volume XCI, no. 1, p 58.